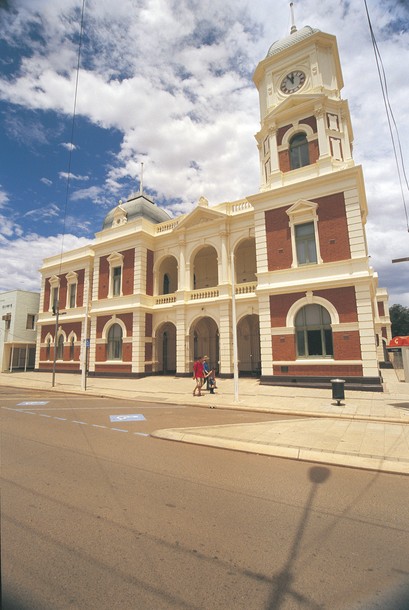 The Boulder Town Hall was built in 1908, and demonstrates the architectural style of the prosperous gold rush days. It is a beautifully preserved historic hall with pressed tin ceilings and wrought iron balustrades.

The Hall was formerly a theatre famous for celebrity performances by Dame Nellie Melba, Eileen Joyce and Joan Sutherland. It still houses a rare and famous Philip Goatcher Stage Curtain, believed to be the last remaining one of its kind. This spectacular curtain depicts the scene of the Bay of Naples and has hung in the hall since 1908. See the lovingly restored curtain be lowered by its original pulley system each Tuesday, Wednesday, Thursday and on Boulder Market days.

On entering this grand old building, you will sense the energy and importance of the hall which operated as a library and municipal offices for most of the 20th century, was the centre of community life in Boulder.

Note: This stately building completed in 1902, houses the magnificent Philip Goatcher drop curtain. On the 20th April 2010 an Earthquake with a magnitude of 5.2 struck Kalgoorlie-Boulder. The Boulder Town Hall suffered extensive damage from both the quake and the after shocks that followed. The Boulder Town Hall is currently closed.

To have more updates about the Boulder Town Hall, visit the Kalgoorlie Visitor Centre Web site.