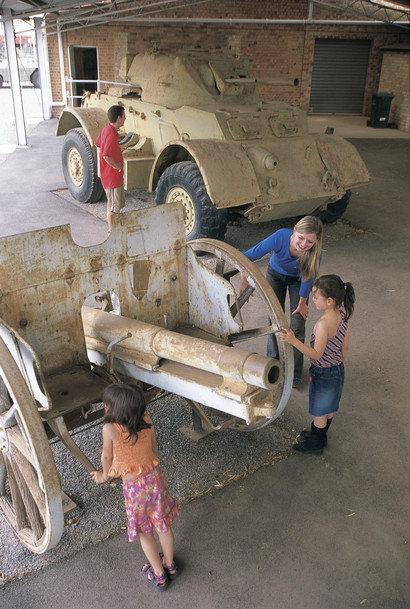 The creation of the Goldfields War Museum in the 1970’s was an initiative of prominent Kalgoorlie-Boulder residents with a strong contribution from volunteers.

The war museum includes a reception room with an operating Visitor Information Centre, the 10th Light Horse Room, a main Exhibition Hall and an outdoor exhibition area that houses the museum’s vehicle collection. View this fascinating collection of the Goldfield’s citizens’ wartime involvement in the Boer War, World Wars I and II and the Vietnam War.


See the impressive outdoor display of armoured vehicles including ’Ferret’ Scout Cars, M3 Stuart Tank , British Staghound, Bren Gun Carrier and a 77mm Krupp M96 NA Cannon captured by the Australian 32nd Battalion. The Museum also has on display, artillery, radio equipment, photographs, documents and much more. Children can dress up in camouflage gear and enter in the holiday competitions.

Note: On the 20th April 2010 an Earthquake with a magnitude of 5.2 struck Kalgoorlie-Boulder. The Goldfields War Museum suffered extensive damage from both the quake and the after shocks that followed. They have moved a small part of the exhibition to upstairs at the Kalgoorlie Town Hall.

Directions:
Coming from Perth, continue from the Great Eastern Highway to Hannan Street